Who should lead the national team?

December 19, 2012
It looks like certain parties have started their 'campaign' of installing a new national coach.

Current custodian K.Rajagobal has been under fire no thanks to the unimpressive results chalked during a string of friendly matches prior the AFF Cup and the failure to retain the AFF Cup after losing 3-1 in aggregate to Thailand in the semi finals of the regional tournament.

To be fair, Rajagobal has always maintained that his goal has always been to qualify for the 2015 Asian Cup in Australia. Remember it is he who guided the team to win the 2010 edition. 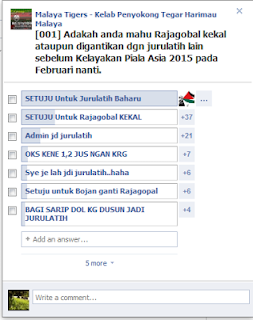 But what have we achieved since?

As our neighbours Thailand and Singapore speak about their teams playing in the two-legged AFF Cup finals, Ong Kim Swee - Harimau Malaya's coach - hogs the limelight in the local dailies as some suggest he should take over Rajagobal's role.

There are also polls on social media if Rajagobal should stay of leave (pic right).

One newspaper quoted Kim Swee as saying he is ready for the job with the blessings of the FA of Malaysia as seen here.

Even former Malay Mail work mate Rizal Hashim touched on this as seen on his blog.

But not everyone is a fan of the young Kim Swee - and apparently T-Team coach Peter Butler is one of them - based on his tweets (pic left).

And to that tweet, former Sabah star Australian Scott Ollerenshaw had this to say;


Mr Butler , what happened to the coaches manual , thou shall not speak negatively about fellows peers(coaches) in media or online

That aside, apparently there is an unwarranted 'tensed' relationship between Rajagobal and Kim Swee. While both maintain they have no beef with each other, certain statements seem to prove otherwise.

So should Rajagobal be given another year to prove himself? If Rajagobal is given the boot, will the new coach have enough time to build the team ahead of the 2015 Asian Cup qualifiers?

How have we progressed from winning the 2010 AFF Cup to today? Who is monitoring the coach and team's progress?

What are our plans for 2013 and beyond? What is the benchmark?

More importantly, what are we doing at the grassroots to ensure there is some form of continuity between the schools and elite levels?

So who decides and who draws the line?

p/s: FA of Malaysia assistant general-secretary Kelly Sathiaraj has decided "not to renew his contract" that expires end of this month as he has taken up a job offer with the Thailand FA which starts next month. All the best Kelly!