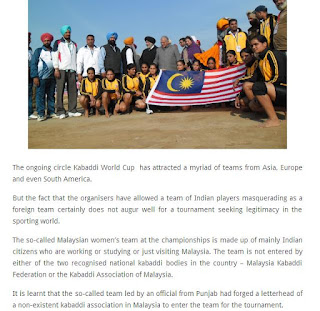 The so-called Malaysian women’s team at the championships is made up of mainly Indian citizens who are working or studying or just visiting Malaysia.

The team is not entered by either of the two recognised national kabaddi bodies in the country – Malaysia Kabaddi Federation or the Kabaddi Association of Malaysia.

It is learnt that the so-called team led by an official from Punjab had forged a letterhead of a non-existent kabaddi association in Malaysia to enter the team for the tournament.

In Malaysia we would say - wah lau wei!

A 'fake' national kabbadi team in India? This was brought to my attention. Read the full article here.
What will the Malaysian governing body do about it - if true?

That aside, there's a new Bahasa Malaysia magazine on racket sports in town. It's called 'Flick', focusing mainly on badminton and will be on sale at a major bookstore sometime next week.