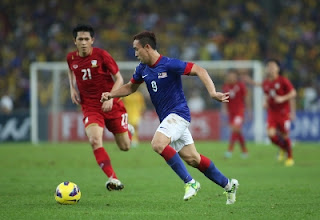 It was nothing like the first leg semi final clash at the National Stadium in Bukit Jalil.

Malaysia gave their visitors a run for their money despite the laser lights dancing around the bad field.

It was a different story in Bangkok.

The pitch was equally bad but South Korean referee Lee Min Hu will have a lot of explaining to do after sending off Fadhli Shas in the first half of the return leg semi final clash between both nations.

Both teams were overly cautious in their tactics with Thailand spending most of the time in the Malaysian half. All they needed were two quick goals in the second half - courtesy of Teerasil Dangda and  Theerathon Butmathan (60th and 65th minutes respectively) sealed the deal for the host nation as they advance to the final with a 3-1 aggregate.

Are the national defenders to be blamed for the two goals?

Members of the Media in Bangkok quoted national coach K.Rajagobal as saying he is "proud of his lads" and will now "focus for the (AFC 2015) Asian Cup qualifiers" which begins next year.

Based on the overall standards of the tournament, it is believed that Malaysia and Thailand were the deserving finalists.

It would be of no surprise if Thailand will go on to win the AFF Cup in the two legged final (Dec 19 - Singapore; Dec 22 - Bangkok).

So was the Harimau Malaya squad truly prepared for this tournament? Have we forgotten about the poor results chalked during the friendly matches and the string of excuses?

Are we still fangless up front?

Or based on the performances and circumstances - Malaysia did pretty well this time around?