Msia v Thailand - who would survive 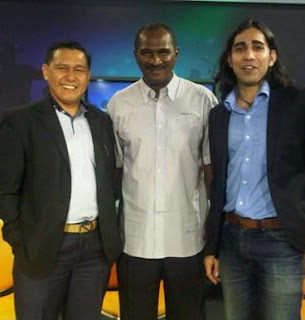 UiTM senior lecturer Sadek Mustaffa spoke about players having Peripheral view and to how Malaysia's win effected the sale of the national jersey.

Zainal Abidin Hassan believes this team is good enough to defend the title.

My harapan - is to see Malaysia win the AFF Cup.

All three of us were on TV3's Scoreboard earlier. The show was hosted by Nadia Zuber.

We stressed that playing Thailand will be an uphill battle - even more so with the second leg being played in Bangkok.

I believe the winner of this clash will go on to net the title. No disrespect to the other semifinalists the Philippines and Singapore.

As said months before the tournament - the Azkals could pull some surprises this time around as they have improved tremendously. Even national coach K.Rajagobal agreed to a certain extent, as seen in this posting published in March. Those who had conversations with me will remember I said the national team would occupy the top four but anything beyond will be a bonus.

One must remember the Thais hunger for glory. They need a silverware to occupy their rather dusty trophy cabinet.

It must also be noted that out of Malaysia's six goals, only one was scored by a striker - Safee Sali.

What will it be against the Thais? Who will survive?