KL still in a mess 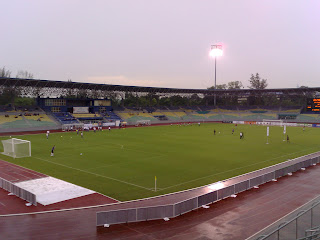 Incredibly, City Hall plans to go ahead with a marching band competition at the stadium on Thursday, the very reason that the pitch in Bandar Tun Razak was damaged in December 2010.

Read the full article by Devinder Singh in today's NST.

What happened to the presumption that the new KL Mayor is all for football? Any man with football at heart would know that a marching band competition on the field will do more harm than good.

It doesn't help that the city team is in a pathetic state - and now to rob away their home?

If there are no efforts to aid the team, just pull the team out of the league and spend the same money on improving the traffic and flood woes in KL.

Oh and we all know what this paragraph means;

Sources told Timesport rivalry between KLFA president Datuk Astaman Abdul Aziz and elements within City Hall is behind the dispute.