Rajagobal hoping for help from the Man upstairs 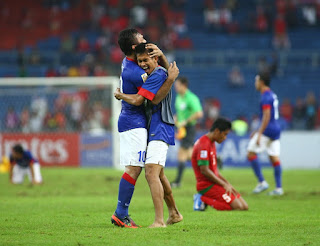 It was a grin that said a lot.

National coach Datuk K.Rajagobal immediately looked up and said; “I have to do more prayers” before bursting into laughter.

Beyond the smile, Rajagobal is hoping for intervention from the Al-Mighty when his lads take on Thailand in the semi finals as he knows it will not be easy meat playing against the tournament’s favourites.

Even the defending champions tag will do little as Malaysia know that Thailand is capable of stealing the thunder this time around.

“Thailand is a strong team. We are already in the semi finals and now we must prepare for our next match. I don’t want to think too much but to ensure the boys are all geared up for the next round,” said Rajagobal.

Harimau Malaya prowl into the AFF Cup semi finals after managing to maul Indonesia 2-0 in their final Group B match at the National Stadium in Bukit Jalil.

Earlier, the national coach applauded his players despite a jittery start in the first 10 minutes. Indonesia came on strong at the beginning of the match but were certainly rattled by the two quick goals scored by  Azammuddin Akil in the 27th minute followed by Mahalli Jasuli’s strike hardly three minutes later.

S.Kuanlan and Khyril Muhymeen Zambri were seen at the Press area as they were sidelined due to injuries.

“It was evident there were tired legs...Norshahrul (Idlan Talaha), Safee (Sali) and Safiq (Rahim). They were not in their normal flow of the game.

“We need Kunalan and Khryil for Thailand and I hope they will be able to join the team by then,” he added.
Malaysia will play Thailand in KL on Dec 9 in the first leg semi final before visiting their opponents in Bangkok in the second leg on Dec 13.

“We had many chances, even more than Malaysia but it was a bad result. The players were motivated but it just didn’t happen. I only blame myself and I take full responsibility,” Nil said.

In an indirect swipe to the on-going controversy surrounding Indonesian football and the Republic’s national body, Nil added;

“We must be united at heart, united in our actions and united in our words. That is the only way for Indonesian football to move forward.”

Singapore, meanwhile, were given an early scare by Laos before managing a 4-3 win to sit at the top of Group B.

The Islanders will play the Philippines in the other semi final clashes (Dec 8 and Dec 12).

HD says: Another exciting journey up ahead.