Hockey is 'clean'; India is back, says Negre 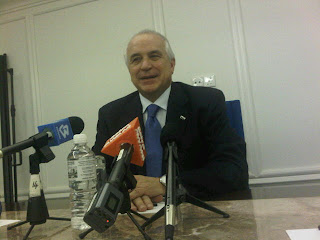 "Hockey is safe, hockey is clean. It is one of our qualities, our selling point that the sport is the cleanest around."

Those were the words of International Hockey Federation (FIH) president Leandro Negre as reported here.

Match-fixing and doping have reared its ugly head in recent times with a string of athletes facing bans and fines over such unsporting activities.

At the same Press Conference held at Royal Chulan Hotel early Wednesday,  Negre went on to say that "Indian hockey is back" as seen in this article.

And it was this observation of his which was rather interesting;

“In India it was always about internal problems and people fighting. I am glad to say that now under Hockey India, things have improved...."