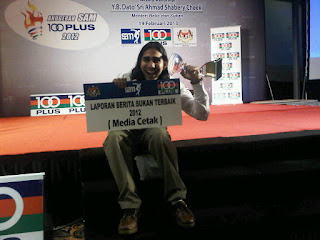 I must firstly thank the Sportswriters Association of Malaysia (SAM) for their continuous efforts to recognise the work of sports journalist in the country.

I must thank those who still have faith in my work although I was informed certain officials refused to look at the stage when the Sports Ministry's secretary-general Mohid Mohammed handed me the trophy and a nice Nikon V1 camera for the Best Article (Print) Award 2012 for my article "Insurance bungle" that appeared in The Malay Mail on Jan 11, 2012 during the SAM-Sports Ministry Awards ceremony at PJ Hilton yesterday.

And I must congratulate my fellow compatriots who were nominated and won awards in their respective categories.

I am glad that through my writings, former Negeri Sembilan physiotherapist See Kim Leong's wife was able to obtain the insurance money after her husband passed away due to a heart attack on Feb 5, 2011 as seen here.

This is in addition to the Best Special Report and Sportswriter of the Year awards that I won last year.

7. Sportswriter of the Year - Rajes Paul (The Star)