Tun Razak Stadium: What a shame! 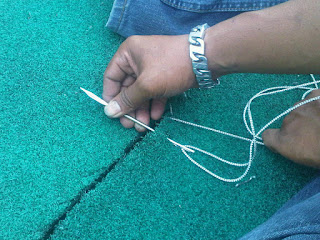 It is the first astroturf hockey stadium in the country.

Yet, the current state at the Tun Razak hockey stadium does not reflect its name or history. It is shameful, pathetic to a certain extent.

The stadium serves as a training and competition venue for all levels - from schools to local leagues.

Nevertheless, the turf - mainly near the 'D' of both ends - is not in a playable condition and poses a great danger to those playing on it due to the uneven surface.

Such were also seen at the KL Education Ministry turf in Pantai and Bandar Penawar Sports School - as exposed by the author - in the past.

The author visited the Tun Razak Stadium yesterday only to see three workers literally sewing the turf with pieces of turf cut just outside the playing area. 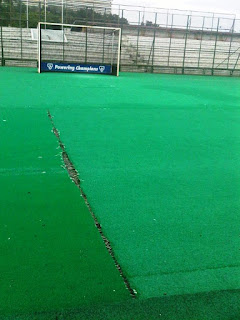 "This is a temporary measure," said one of the worker.

When asked if such a measure will work, the worker smiled.

But the regulars playing at the stadium are not impressed.

"We pay full amount but we get a lousy playing surface. We are forced to avoid the uneven areas and it spoils our matches.

"Extra precaution must be taken especially when school children use the turf as an awkward bump could see the ball bump into the air and hit a player," the player who wished to remain anonymous added.

It will be interesting to see if the KL Education Ministry - located exactly opposite the stadium - are well aware of the dangers posed by the turf  ahead of the school zonal competition.