"What the f*cking hell is that!" 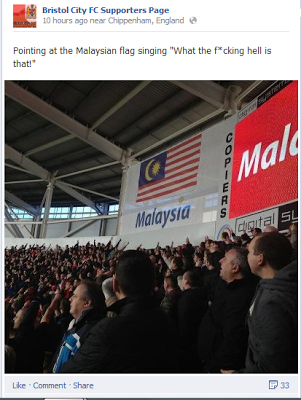 This makes a good case study of instances where the social media supposedly representing the voice of a certain organisation (or its supporters) are clouded over what is acceptable and what isn't when engaging with the public.

Nevertheless, what stole the limelight was the way and manner those administrating Bristol City FC's Facebook and Twitter accounts engaged with its 'followers'.

A picture of Bristol FC fans pointing at the Jalur Gemilang (Malaysian flag) while singing; "What the f*ucking hell is that!" was posted on the Bristol City FC supporters page.

The key element of managing the "voice" of a certain group - official or even fans - is to always ensure ethics are at play. Perhaps the Facebook posting may have obtained 'recorded breaking' shares, likes or comments and perhaps the Bristol FC supporters Twitter account may have garnered a handful more of followers.

Nevertheless, the question is - do we need to create attention by stooping so low?

Football is all about fairplay and fans should know better. The Malaysian flag was targeted as several of it were located around the stadium miles away from the country of origin.

It must be reminded that Malaysians - in the form of Vincent Tan and Chan Tien Gee - are the owners of the Cardiff City.

Perhaps if Bristol were to ever play in Malaysia - most of the fans here would react "Who the f*ucking hell are they?".

But what I can assure Bristol City FC fans is that if your club faces financial woes, you can always rely on a Malaysian to own your club. Perhaps we could get Robert Kuok or Ananda Krishnan interested.

An interesting case study of how a "naughty" posting attracted plenty of flak and only time will tell if Bristol City FC would gain or lose more supporters in the long run.