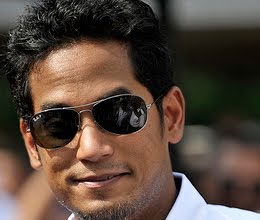 The tech-savvy Khairy Jamaluddin (pic) has been appointed as the Youth and Sports Minister. The announcement was made by Prime Minister Najib Razak minutes ago.

Khairy, the Rembau MP who is also the Umno Youth chief, has been associated to the portfolio as he has always been seen as the fresh face representing the Malaysian youth. He also has plenty of experience in the sports scene - mainly football - having formed UPB-MyTeam before becoming the FA of Malaysia deputy president.

Naturally, Khairy will be expected to make plenty of changes especially within the ministry. He is well aware of the problems faced but it remains to be seen if any drastic measures can or will be taken during his tenure to ensure the ministry is free from minnions and little Napoleons.

All the best KJ.

HD says: Brace yourself for a rough ride ahead bro.