Will Pahang be punished? 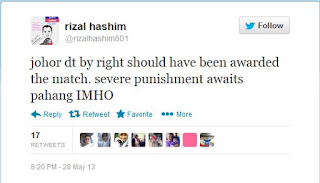 UPDATE May 31: Johor FA president Tunku Ismail Sultan Ibrahim is still serving his six months suspension but he made a statement as seen here.

Is the Johor prince in trouble again?

A meeting is being held at Wisma FAM to discuss about the FA Cup return leg semi final between Pahang and the Southern Tigers after the match was called off yesterday due to crowd trouble. The number of fans in the stadium clearly exceeded the the stadium's 35,000 sitting capacity.

Such incidents tend to happen at major matches including that of the pre-World Cup Malaysia-Singapore match at the National Stadium in Bukit Jalil in 2011 where FAM were later fined RM14,200 for crowd disturbance and security flaws as reported here.

Will Pahang be penalised?