However, the coalition party managed to win Kedah and Perak unlike the past election.

The numbers see BN winning slim majorities in most areas - and the indication is clear.

The outcry on social media is apparent and there is no point turning a blind eye. The same happened in 2008 when the government then decided to ignore blogs and online portals. It backfired.

Social media was not treated seriously up until recently and this was evident based on the conversations that revolved around the masses and the political parties.

To call it a 'Chinese Tsunami' - perhaps is not the right choice of words.

It is also clear that MCA has lost the plot while the results show that most do not really agree "extremist views" - thus the number of seats PAS had lost.  DAP and PKR - some just love them, others fell in love with them for they are simply the alternative.

"Don't care who we vote for, as long as it is ubah," a voter was overheard saying near Jalan Pahang.

BN leaders need to get off their high and mighty horses and realise the true sentiments of the people.

Former deputy higher learning minister Saifuddin Abdullah - who lost his Temerloh parliamentary seat - said there needs to be a "new version of BN". Read more in The Malay Mail today.

It is time for the elders to listen to these younger blood - for if BN carry on with the same attitude, it will be disaster in the next election. 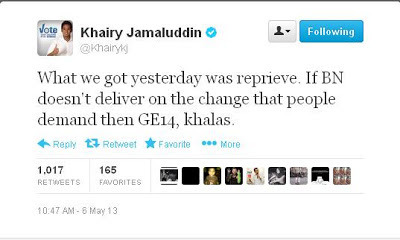