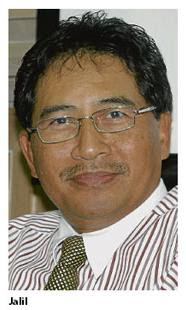 Having spent a day asking around and speaking to various folks - from writers, Youth and Sports Ministry insiders to observers, here are some of the names that could turn out to be the new Sports Commissioner (in no particular order) - as published on the backpage of The Malay Mail today.


1. Ab Jalil Abdullah, National Sports Council (NSC) sports management director
- it will be seen as a promotion for the S54 grade officer. Has the expertise but mainly on elite sports. Sports Commissioner's Office is also about mass sports. It would finally be the break he deserves as time (or rather age) is not on his side.

- an unknown among those outside the ministry but Madzrib was apparently "groomed for bigger things" only to be placed in cold storage as he does not click well with certain top officials. He once served as a deputy director general for the sports development division within the ministry and is currently a Jusa C grade officer.

3. Mazlan Ahmad
- a man that needs no introduction. The former NSC director general has ruffled many feathers and while some adore him, there are others who have stopped talking to him. Unlikely to return to the system in such a position, but as the infamous saying goes "bola itu bulat, anything can happen".

4. Ahmad Shapawi Ismail
- yes, he was just made the National Sports Institute chief executive officer and has not finished much of the work he has started but those within the Sports Commissioner's Office (SCO) know him and his working style and many out there believe he would be more suited to making better changes in the SCO instead of NSI. Instead of returning back to his S54 grade in NSC should his term ends in NSI, playing SC could see him enjoy a higher pay grade (Jusa).

5. Dr Ramlan Aziz
- his name is also being bandied around, saying he is the best man for the job but I beg to differ. Ramlan is a man of science and he would be better off in a position where his expertise can be fully utilised. Unless there are efforts to sideline him, then being the SC could just be another retirement plan for the singing-guitar strumming doctor.

6. Mohid Mohammad
- Ahmad Bakri Shabdin, Nik Mahmud Nik Yusof and Yassin Salleh were secretary-general of the ministry before playing SC. While Mohid still has several years ahead of him, by virtue of precedent he could end up heading SCO.

Youth and Sports minister Khairy Jamaluddin is expected to announce his candidate soon. Will it be anyone from the list above - or could it be someone outside of the system.

Perhaps one who has a legal background, is able to restructure SCO, knows local sports and is aware of the day to day problems faced by those within the system.

Did I just describe myself? (sic)