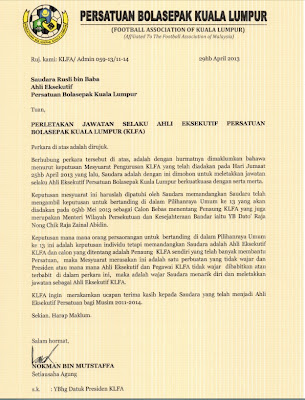 It is an unprecedented move as the KLFA issued a letter to former KL team manager Rusli Baba requesting him to quit the association after he decided to contest as an independent candidate at Lembah Pantai, going against Barisan Nasional's candidate Raja Nong Chik Raja Zainal Abidin and PKR's Nurul Izzah Anwar.

Raja Nong Chik is the FT & Urban Well-being Minister and he is also the patron of KLFA.

The decision was made based on a meeting on April 25 - five days after the nomination papers were filed by the candidates.

Rusli acted as the team manager for the city outfit last season.

KLFA president Astaman Abdul Aziz is an Umno-man, having served as Titiwangsa MP prior the 2008 elections. KLFA vice president Johari Abdul Ghani is currently contesting in the same Parliamentary seat under BN's banner.

The FA of Malaysia (FAM) clearly stated no member can be removed due to political differences.