September 12, 2013
Ever since the late Tan Sri Hamzah Abu samah vacated FAM, many Malaysians became critical towards FAM and the sport. One should not simply use the word, typical Malaysian, before knowing the fact. - are Malaysians not fare in their comments and criticism?? what warrants you to brand them typical??? People who are always in denial and come from the setup, will say things and insults fellow Malaysians intelligent opinion(lets not be a savour grape) For your knowledge, my opinion is a well thought opinion. I'm a qualified football coach...and i've got the "ammunition" for it, do you have it too?? Sometimes we're blinded due to emotions. We tend to say things we ourselves don't understand.-like calling Malaysian typical and, panting a bad picture about them. HSKL says:The truth is always difficult to "swallow"

Those were the words of reader HSKAMAL.

Sports Minister Khairy Jamaluddin, believes Malaysians could be happier if we have a winning football team. He was referring to Malaysia defeating Thailand 3-0 in the final group match of the four-team tournament in Kuantan. 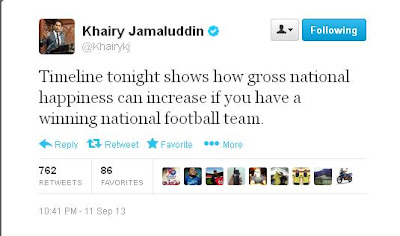 Nevertheless, there are those who claim that we should not be easily carried away. The Malay Mail sports editor Tony Mariadass had this to say: 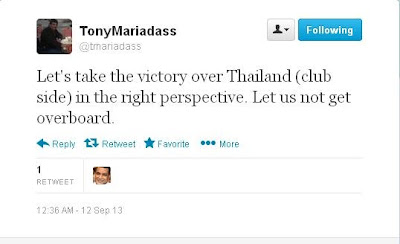 Or do we continue to get excited over winning small events?

When will we start making an impact in bigger tournaments?

How long more do we have to wait?

HD says: While we continue to debate about the bigger picture, it is hoped that Malaysia will win the Merdeka tournament ahead of Malaysia Day on Sept 16.