September 09, 2013
School teachers are willing to pay exorbitant sums to ensure they get transferred to their state of choice.

A month-long probe by The Malay Mail revealed “middlemen” collected between RM3,000 and RM8,000 if a transfer was successful. 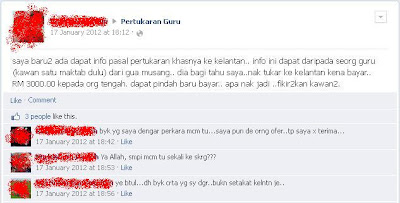 However, some teachers have fallen victim in what seems to be a scheme cooked up by individuals supposedly connected to officials within the Education Ministry.

The amount paid will depend on the choice of the state. A transfer to Johor may cost RM3,000 while transfers to “hot states” like Kelantan, Terengganu and Pahang could balloon to RM8,000.

A Kuala Lumpur-based teacher, who has been applying to teach in Pahang numerous times, revealed she sought the help of a middleman to ensure her transfer got through.

Read the full report in The Malay Mail today.

Teachers have resorted to social media to exchange information hoping to meet their match, calling it “suka sama suka”, to get their transfers approved faster, as seen here.

The National Union of the Teaching Profession (NUTP) has expressed shock over claims teachers are paying middlemen up to RM8,000 to obtain transfers to their state of choice, as reported here.

The Education Ministry has launched an investigation into claims that teachers are paying middlemen to get transferred to their state of choice, as published here.