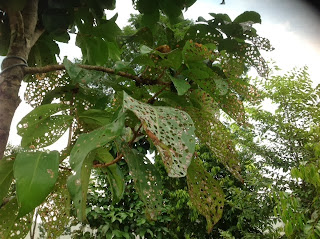 Taman Dusun Bandar, the tropical fruit orchard in the heart of the city which opened its doors to the public on Sept 1, is in shambles.

The Malay Mail, in series of  probes in 2011, highlighted the pathetic state of affairs at the fruitless RM17.2 million orchard park located in Jalan Bellamy, forcing the closure of the park then.

Kuala Lumpur City Hall had two weeks ago issued a statement saying the park was now open to the public.

A visit by The Malay Mail team, however, revealed the 7.7ha urban oasis has yet to live up to its name and there has not been much change over the last two years.

Our observations revealed:
* Many trees were unhealthy as its leaves were either eaten by insects or caterpillars.
* Fruit trees were still young.
* Trees and plants were not tagged.
* Park seems to be breeding ground for mosquitoes.
* Lack of shade in the park as most trees have yet to mature.
* Buildings are not well maintained.
* Cafeteria appeared to be still under renovation.
* Toilets were filthy, filled with cobwebs while tap heads were broken.
* Large chunk of the plaster ceiling in women's toilet collapsed.

HD says: Why declare the park open when it is clearly not ready?
Jalan Bellamy kuala lumpur Taman Dusun Bandar