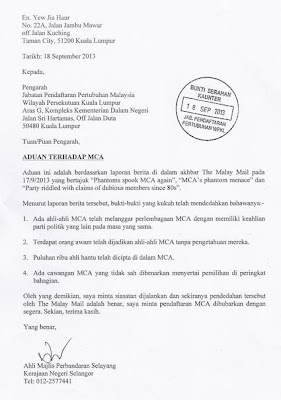 RoS, meanwhile, has initiated investigations into MCA as reported here.

The DAP has challenged the Registrar of Societies (RoS) to investigate the MCA following The Malay Mail's expose of six questionable members in the Taman Tasik Jaya branch in Negri Sembilan.

Segambut MP Lim Lip Eng said the move was necessary to ensure the RoS was fair when it came to taking action against political parties.

“RoS took action against the DAP based on stuff written by a so-called Father Augustus Chen, a person who none of us know about. We now want the RoS to investigate MCA based on what was published by a major newspaper,” said Lim.

“RoS will now have to show to the public that it is fair in their investigations. We have already lodged a report so no one can say RoS cannot take any action.”

"It is not about getting even. However, The Malay Mail has written about it, obtained confirmation from various people including the party leaders, so I guess all RoS has to do is to look into the matter," said Yew.