Merdeka Cup: Passion for the nation 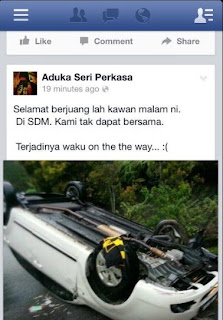 Imagine getting into your car all geared to watch a football match only to be involved in an accident and your vehicle having turned turtle by the side of the road.

Many of us would be traumatised.

But not this particular fanatic football lover who refers himself as Aduka Seri Perkasa.

Apparently he got involved in an accident while on his way to watch the Malaysia-Myanmar Merdeka tournament match on Monday.

Instead, he flagged down a taxi and continued his journey to Kuantan to watch the match. And the trip turned out to be worthwhile as Malaysian edged Myanmar 2-1 to book a spot in the final.

Having checked his Twitter and Facebook page and also a one line reply from him over the "accident", it is safe to say Aduka is a hardcore football fan.

But this is not just about the "accident". It is about fans who are willing to travel the distance to support the national team despite many had claimed the ticket prices are "too steep".

The FA of Malaysia yesterday slashed the ticket price from RM30 (free seating) to RM20 for the remaining matches. Malaysia will take on Thailand tonight in the final group match.

Instead of whining in the comfort of your own homes, comparing the standard of play between England and Malaysia, head to the stands and cheer the team.

Loyal fans remind us to be proud of our stripes - to stand by our Tigers.

Read more of what national Under-23 coach Ong Kim Swee had to say about this episode in Haresh Says, as published in The Malay Mail today.