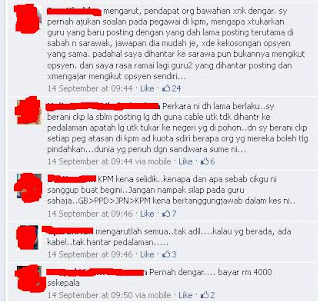 Many have resorted to social media to air their grouses following The Malay Mail’s expose on the cash-for-transfer fiasco involving teachers.

Facebook page Pertukaran Guru, where most teachers exchange information and try to find their match to transfer to their state of choice, saw many postings urging the Education Ministry to review its transfer policy instead of penalising teachers.

Many claimed teachers paying for transfers have been going on for some time as desperate teachers are eager to head to the state of their choice to join their families.

A comment on Facebook read: “It has happened. I was assured of a transfer by an individual but I have to pay RM2,000. I declined the offer as I felt it was a form of bribery.”
Another commentator said: “In the past, someone offered a transfer package claiming it is a confirmed deal and someone from inside will sort it out.”

MEANWHILE, MCA deputy president Datuk Seri Liow Tiong Lai does not discount the possibility of more phantom members within the party following revelations by The Malay Mail of six questionable members in a Negri Sembilan branch.

"It could be happening elsewhere. This is mainly due to the party elections (in December) as some people want to bypass the system to get things done," he said.

"We need to have a total revamp of the system. There needs to be a re-registration of members to look at the existing members and come up with stringent measures to overcome this issue."

But MCA secretary-general Datuk Kong Cho Ha said: "These are issues brought up by people with vested interests. Our membership department and the national organising secretary have been very diligent in ensuring everything is in order."

All this and more in The Malay Mail today.