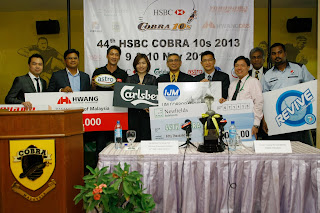 Petaling Jaya, Wednesday: COBRA Rugby Club, today announced the main sponsors participating in the 44th HSBC COBRA 10s 2013, as the organizing committee enters its final phase of preparations before the Tournament takes place on Saturday 9th and Sunday 10th November 2013 at the Petaling Jaya Stadium in Kelana Jaya. Title sponsor HSBC were joined by Main Sponsors made up of IJM Corporation, Carlsberg Malaysia, ASTRO, Newfields Advisors, Permanis, Hwang Investment Management and Yokohama in what is expected to be an intense 44th HSBC COBRA 10s.


This home-grown rugby tournament was conceived in 1967 and COBRA has been pivotal to the continued success of the tournament, tirelessly working towards making it an eagerly anticipated fixture in the international rugby calendar. In the 44th edition of the world’s premier 10s tournament, 16 teams representing 7 countries, including six from Malaysia, will compete to wrest the trophy from defending champions Daveta Rugby of Fiji.


Most of the Main Sponsors have been involved in the tournament previously, testimony to the credibility and appeal of the tournament. The positive support gained from the main sponsors has allowed COBRA to assemble a very high quality field of teams that promises Malaysian rugby fans a fantastic weekend of high quality rugby.


“On behalf of COBRA as well as the Malaysian rugby fraternity, I wish to convey our heartfelt gratitude to each and every sponsor for their support. The strong support from the sponsors has enabled us to assemble an incredibly strong line up of teams from seven nations, that will give rugby fans here an amazing weekend of rugby,” said Tan Sri Dato Krishnan Tan, Chairman of the Organising Committee.


Stalwarts of the tournament, HSBC Penguins from the United Kingdom, defending champions Daveta Rugby and Malaysian favourites Borneo Eagles and COBRA are seeded and expected to go through to the quarterfinals but they will be given a tough examination by the Kiwi contingent made up of Global Lions, Papatoetoe RFC, Fiji Auckland RU and 1NZBDE (1st New Zealand Brigade), who are returning to the tournament after a 25-year hiatus. The NZ military side used to be perennial champions and in fact, are the record winners of the COBRA 10s having won it 11 times. They are expected to pose a strong challenge to the established order. Rounding out the international teams are NNK Northlink from South Africa, Casuarina Cougars and NS Silverbacks from Australia and debutants Cambodia Koupreys.


Apart from COBRA and Borneo Eagles, there is strong representation from Malaysia with six teams in the fray including Sibu District Rugby Union, NS Wanderers, Keris Conlay and KK Sharks RFC. Borneo Eagles will be looking to avenge their defeat to Daveta in the finals of the recently concluded Borneo 7s while host team COBRA will be looking to once again claim the championship title last won in 2008.


The HSBC-COBRA 10s will be played in a four group format with 16 teams competing for the coveted Hui Weng Choon Trophy and RM70,000 in total prize money. The tournament begins at 8.30am on both days and rugby fans can expect an extravaganza of rugby along with ample food and drinks to keep them sated all weekend.


As part of COBRA’s social commitment, they will be organising coaching clinics for schoolboys, which will be undertaken by some of the participating teams. They will also be arranging for schoolboys to watch the finals.
Cobra Krishnan Tan rugby