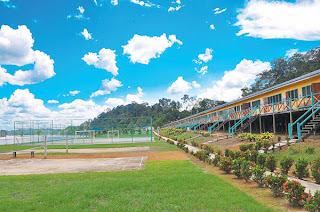 We often hear of communities whining and complaining about the lack of maintenance of facilities constructed by the government.

But not the folks at Rumah Richard Nanga Beguang in Song, Sarawak.

A small village located some 50km from Kapit and 130km from Sibu, the locals began living in the area in the late 1940s. It was regarded as the first settlement along Beguang River.

As the area started to progress, the government saw it fit to include a sporting facility right in front of the longhouse.

In 2010, a futsal court was constructed under the Gelanggang Futsal 1Malaysia project, which was ready just before the Hari Gawai (Harvest Festival) celebration.

However, a major flood swamped the village in August the same year, leaving the court covered with mud.
The villagers did not whine, complain or demanded for assistance from any party. Armed with brooms, shovels and other tools, they got together and cleaned the area. They called it gotong-royong — a word alien for city folk.

Read more in Haresh Says in The Malay Mail today.