THE venue: An Irish bar in the heart of Bukit Bintang.

The time: Five hours before the kick off of the Malaysia Cup final last Sunday.

The ‘visitor’: Englishman Antony Sutton, who settled down in Jakarta more than a decade ago and is known as
Mr Jakarta Casual as per his blog and column in Jakarta Globe.

The ‘host’: Yours truly

Sutton is among the growing number of Mat Sallehs who is extremely fascinated with football in this region. He often writes about the leagues in Thailand, Myanmar, Singapore, Indonesia and even Malaysia.

We first shared our views about the possible outcome of the Malaysia Cup final. I had earlier predicted Kelantan to defeat Pahang 2-0. Instead, the Elephants trampled over the Red Warriors as Argentine Matias Conti scored the solitary goal of the match for Pahang to reclaim the title they last won in 1992.

Sutton then progressed into the M-League. He viewed it as the ‘best league’ in the South East Asian region.

I then apologised profusely for being a skeptic.

The Japanese visited the FA of Malaysia (FAM), asking for pointers on how to run a league and today they are far superior than us.

Australia’s football league only started in 1977, after their national team managed to qualify for the 1974 World Cup. Since then Australia has played in the 2006 and 2010 World Cups.

We, instead, have been playing organised football since the early 1900s. The inaugural Malaya Cup was held in 1921.

Sutton got the picture.

We spoke about the handout attitude where state FAs expect money from the state government. We spoke about players not being paid their wages for months Despite repeated warnings by FAM, nothing has changed this season.

We can be better but we choose to be stuck in second gear. 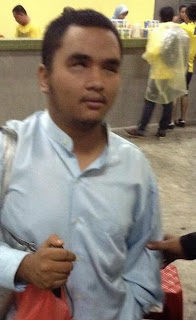 However, beyond the ticketing issue, poor presentation during the pre-match press conference and fans lighting flares after the Malaysia Cup final, I was amazed by the loyalty of one particular Pahang fan.

A football enthusiast, who prefers to be referred to by his Twitter handler name @frman123, bumped into a blind Pahang supporter.

I spoke to @frman123 yesterday to find out more about his encounter.

“His name just slipped my mind but he came to KL from Kuantan by bus and a fellow Pahang supporter drove him to the Shah Alam Stadium. Many in Kuantan know him as he usually recites the Braille version of the Al-Quran at the Masjid Sultan Ahmad Shah.”

“The 23-year old chap said although he cannot watch the match, he is happy to be at the stadium to support Pahang. I was touched,” he added.

An Englishman and a special fan with keen interest in Malaysia football. It cannot get any better than that.

It has been a dramatic season and here’s hoping to a professionally run M-League in 2014 – where wages are paid on time and better table cloths are used during press conferences.