November 18, 2013
It was not the entrance national striker Safee Sali (pic) had in mind.

Just as he replaced Azamuddin Akil in the 70th minute, Bahrain’s Ismaeel Abdul-Latif scored the solitary goal (71st minute) of the match in the Asian Cup qualifying match last Friday.

“I’m not happy at all. I entered the field and our opponents scored. I don’t want to see such a thing happening again.”

Meanwhile, the late A. Subramaniam (pic below), who passed away on Saturday night, was a firm believer in developing young talents. 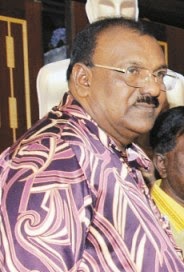 To him, the base needs to be strengthened before one can achieve better results at the higher level.

During his short stint as Federal Territory Amateur Athletics Association (FTAAA) president, he introduced plans to promote the sport at grassroot level.

Read all these and more in The Malay Mail today.

HD says: RIP Subramaniam, all the best to Safee and the national team!
A. Subramaniam athletics football FTAAA Safee Sali The Malay Mail