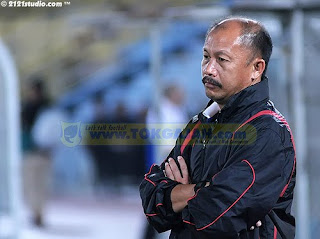 I don't think so.

KL coach Razip Ismail is a modest and humble man. I doubt he makes millions working either as a KL City Hall official or coaching the city team. I doubt he owns a big house or drives a Ferrari 458 Italia.

Yet, there are several individuals who would want to topple him down. Why?

For the record, KL are placed 12th in the Super League standings, not first but 12th.

And KL does not enjoy sound financial backing compared to Barcelona, Bayern Munich or even Kelantan.

Read about the conspiracy to get rid of Razip in my column From the Sidelines published in today's Mailsports.

There are those who are eager to pick on Razip but what about coaches that tend to 'ABC' their services? I'm sure several of our former players, who are now "mini celebrities", can relate to that.

Pic: A nice picture of Razip from TokGajah.com which I had to use (without permission).

HD says: Razip, is being the KL coach really lucrative? If it is, may be I can quit my job at the Malay Mail and take up coaching.