Fifa investigates, FAM in the dark. 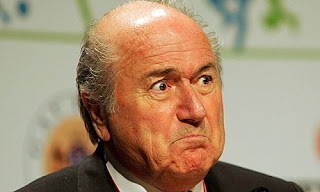 When I first wrote about it, I got cynical remarks. Some even laughed it off.

When Fifa president Sepp Blatter (pic) was at the Sultan of Pahang's residence, I touched on the same subject and again I heard some sighing - as many wonder of my continued fixation over the issue. Read it here.

Were were duped into a Con Deal. That was on July 12, 2009 when Malaysia hosted "Zimbabwe" in an international friendly match. The visiting team turned out to be Monomotapa United FC instead and not the national team.

I read today's NST and smiled. I'm sure Devinder Singh of NST was smiling too when he was typing the story.

Employees from at least six national football associations were under suspicion of assisting the criminal network, which was believed to be working out of Singapore and Malaysia.

As usual, the FA of Malaysia and the Police (D7) are in the dark over such claims.

HD says: I wonder who the employees are. Hmm....