It was painful to watch... 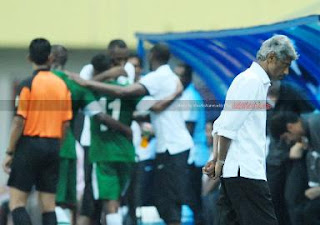 ...Trent Milton scoring a goal in the dying minutes as Australia bagged the Azlan Shah Cup with the final score of 3-2.

However, the Malaysians were the first to start the ball rolling thanks to Faizal Saari. Australia equalised through Nicholas Budgeon and later took the lead through Carig Boyne's effort.

Tengku Ahmad Tajuddin made it 2-2 for the host team but it wasn't enough as the team from Down Under stole the limelight in front of a packed stadium in the final minutes of the match.

This is Malaysia's fourth appearance in the final but they have yet to win the tournament.

It was also painful to watch the friendly (football) match between Malaysia and Saudi Arabia at the Shah Alam Stadium yesterday.

The Harimau Malaya hardly threatened the visitors as the Saudis were two goals up at half time courtesy of Yousef Alsalem and Yahya Alshehri.

K.Rajagobal's lads put on a better show in the second half and were rewarded with a goal thanks to Safiq Rahim.

Nevertheless, Saudi's Naif Hazazi scores the third goal of the match in the 89th minute while Hamdan Alhamdan ensured a comfortable lead in the dying minutes as Saudi Arabia won 4-1.