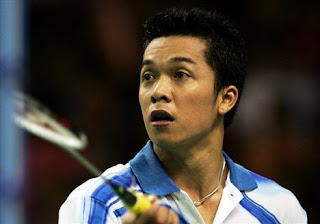 The man has seen it all. Yet, he joins the likes of Peter Gade, as being modest as ever. And he's a hot commodity in Indonesia thanks to his superstar status.

However, I was told that Taufik has only two major sponsors to date - Nestle Milo and Yonex.

"Maybe he doesn't need the money. But he should take advantage of his super star like status and start tying up with major brands. It's only natural as he is still Indonesia's top badminton player," said a source from Jakarta.

It seems Taufik will be in talks with an energy drink manufacturer, as reported in today's Mailsports.

Taufik is set to play Chong Wei in an exhibition match on April 3 at Juara Stadium and he could also sign the deal with the energy drink manufacturers - ahead of their official launch in Indonesia.

HD says: 100Plus is good when taken warm...especially when you kena denggi..trust me!