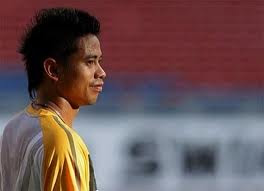 It is supposed to be a friendly-cum-charitable match between Etoile FC and Malaysia at Stadium Jalan Besar in Singapore tonight (live on Astro Arena - 801).

But don't expect K.Rajagobal and his lads to be in a charitable mood.

The game against the Singapore League-based French team will be a good avenue to groom the national Tigers ahead of the World Cup Asian qualifiers in June followed by a 10 day Premier League festival featuring Arsenal, Chelsea and Liverpool in July.

National skipper Safiq Rahim (pic) is not trying to be overconfident but believes the team is motivated to do well, as seen here.

Even the BA of Malaysia (BAM) will no longer be in a charitable mood when it comes to former national coach Misbun Sidek - contradicting outsiders as seen here and here.

As a senior official said;

"Misbun has already resigned. There's nothing to discuss anymore. The Council will meet on April 1 but it is highly unlikely they are going to talk about him unless Misbun states that he wants to come back. It's time to move on."

HD says: I'm also not in charitable mood. So, no comment-lah.