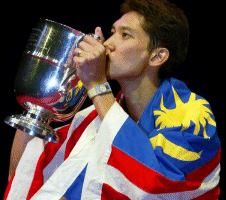 National shuttler Hafiz Hashim (pic) is eyeing for a shot at playing in the London Olympics next year.

Having opted out from the national stable, Hafiz now trains under the KL Racquets Club banner and made this revelation duing a Press Conference held this morning. Read the full report in today's Mailsports.

This isn't the first time Hafiz has left the BA of Malaysia. He was once attached with Nusa Mahsuri. His best achievement is winning the All-England championship in 2003.

Many, however, believe the lanky player has lost his charm a long time ago.

Can he prove his critics wrong in London?