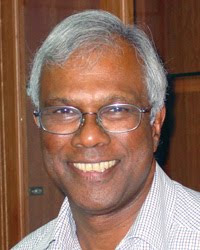 There were earlier claims that Dr M.Jegathesan (pic) will be the next vice-chancellor of University Sains Malaysia (USM).

It was a full time job that pays well. An honour for anyone being in the academic line.

But Jegathesan denied the rumours, as seen here. "No sir" was his brief reply.

Three days ago, Jegathesan called me up and explained to me the difference between a vice-chancellor and a pro-chancellor.

Unlike a vice-chancellor, a pro-chancellor attends ceremonial functions, usually once a year, to hand out diplomas to the graduates.

He told me not to write anything until USM confirms his appointment as the new pro-chancellor. USM made it public today.

HD says: I didn't bother going for both my convocations. The bloody packages offered by photo studios just to rent the robe and take snapshots was simply daylight robbery.