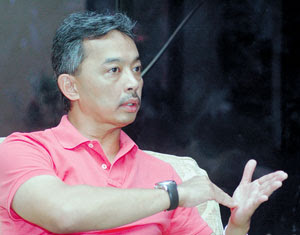 KUALA LUMPUR: Malaysia has played polo around the world but come this June, Malaysia wants to do exceptionally well in the all-important FIP Polo World Cup Zone D Qualifier from June 11-26.

It is a tournament that the Malaysians will be rooting for the national polo team to make the top three which will not only give the sport a big boost in the country but also take it to a new level.

At stake is a historic place in the FIP Polo World Cup which will be played in San Luis, Argentina from October 11-25. To earn the passport to Argentina, Malaysia must finish in the top three.

Royal Malaysian Polo Association (RMPA) president Tengku Abdullah Sultan Ahmad Shah (pic), who is also the Crown Prince of Pahang, sees a “tough battle” but in the same breath is confident that his wish will come true.

“We are in a tough group which is made up of some of the best polo playing countries in the world but we hope to perform well and qualify for the World Cup Finals,” says the sports loving Prince.

“There are some plus factors that could work in our favor and we have to make use of it to make an impact in the Qualifier. My wish is to see Malaysia play in the World Cup Finals.”

Malaysia must finish in the top three to earn their passport for a historic place and play in their first ever FIP Polo World Cup Finals. Apart from Malaysia, some of the best known polo playing countries in the world - Australia, New Zealand, India, Pakistan and South Africa and minnows Nigeria and Singapore will compete in the Zone D Qualifier.

“At this stage we are in the final phase of training before the tournament gets underway in June. Australia, New Zealand, India and South Africa are all known polo powerhouses in polo but we will not stand their reputation in our quest for glory.”

“It is my fervent wish to see Malaysia plays in the FIP World Cup Finals. We have never qualified for the Finals but it simply does not mean that Malaysia will be easy meat for the top guns.

“We will go into the fray well prepared. I am happy with our preparations and we have assembled the best team to carry Malaysia’s challenge. Malaysia will have to go in with confidence.

The Qualifier will be played at three different venues – namely the Royal Pahang Polo Club in Pecan, the Putrajaya Equestrian Park in the administrative capital of Malaysia and the Royal Selangor Polo Club.

HD says: Wondering if I'm too old to pick up polo.