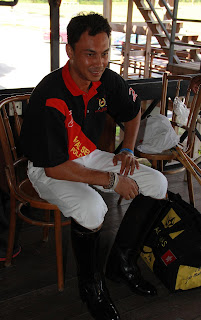 A bunch of “very talented” individual polo players carry Malaysia’s hopes and aspirations for a historic place in the FIP Polo World Cup Finals scheduled to be held in San Luis, Argentina in October.

Malaysia, despite being one of Asia’s most established polo nations, has never made it to the FIP World Cup Finals. And as recently as two months ago the national polo team assembled to carry the country’s challenge looked “lost and chaotic”.

But all that has changed and today Malaysia look positive for a top three finish in the eight-team FIP Polo World Cup Zone D qualifier that will be played at three historic polo clubs – the Royal Pahang Polo Club (established in 1926), the Royal Selangor Polo Club (1902) and the Putrajaya Equestrian Park (2005) from June 11-26.

National polo skipper Shaik Reismann (pic), the only Malaysian player with World Cup experience, having played for Singapore in India in 2000, summed it up all when he said “today we (Malaysia) are a strong unit with lots of confidence” that is capable of finishing in the top three for a place in the Finals.

Apart from Malaysia, the other teams vying for a ticket to Argentina are Australia, New Zealand, India, Pakistan, South Africa, Nigeria and Singapore.

“I do admit that with the likes of Australia, India, New Zealand, South Africa and even Pakistan - all strong polo playing nations, - we are in a very tough zone (Qualifier). This makes us nervous but the only way to overcome this is to be positive.

“It was haywire when we got together as a team. As recently as two months ago we were still chaotic. But all that has changed now. We have talented individual polo players who have moulded well into a strong unit with lots of confidence,” said Shaik

“Right now you can see a lot of chemistry between the players. This is certainly a plus point for the team. From March onwards we will increase our training tempo as the tournament draws nearer.

“Every player has a role to play. On top of that we need to be very disciplined and fully focused. And we are not lacking in this field. I am pleased and happy with the way everyone is carrying out his duties.”

Shaik picked Australia South Africa and New Zealand as the front runners in the Qualifier but in the same breath pointed out that every team, including Malaysia, is good as any other. In short, we cannot underrate our rivals.

“It is going to be a very tough and physical tournament. We are also keeping our fingers crossed that the weather will hold out. The weather is the worst nightmare in polo. If it rains, it will be hard on the teams,” added Shaik, who plays with a +3Handicap.

Shaik, who has worked as a racehorse trainer, is also a horse dentist and has been a professional polo player since 2006. A three-time winner of the Thai Polo Open, apart from winning the SEA Games gold medal in polo in 2007 in Korat, Shaik has also won many medium and high goal tournaments in Malaysia, Singapore, Philippines, Australia, New Zealand and Argentina.

As hosts, the Royal Malaysian Polo Association wants to ensure that Malaysia stages an outstanding (Qualifier) tournament that FIP can be proud of to enhance Malaysia’s hopes as serious contender to host the 2014 FIP World Cup Finals.

HD says: Loves listening to Riders on the Storm by The Doors.