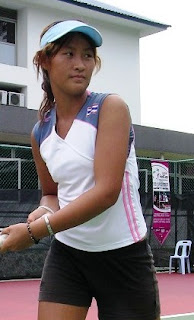 It is also the nickname of Thai lass Noppawan Lertcheewakarn.

I first met Noppawan at the National Tennis Center along Jalan Duta. She was very young back then, as seen in the picture.

I featured her in an article, "Thai lass yearns to go her countrymen's way" which was published on May 10, 2007.

She has made a name for herself since, having even won the Junior Wimbledon in 2009.

Earlier today, Noppawan continued her fine form after beating world no 100 Alberta Brianti in the first round of the BWM Malaysia Open 2011.

The beauty of it all, Noppawan didn't beg for support from the government or the national associatio. Just like a true professional, she sought her own finances and succeeded.