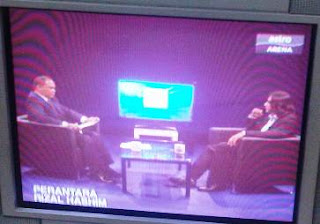 I was invited as a guest for Astro Arena's Dengan Izin which was aired earlier (11.30pm).

The host, former Mailsport journo Rizal Hashim, had posed many 'interesting' questions revolving around the FA of Malaysia and the National Sports Council.

There were moments where things seemed a little tensed but it was all done in good faith - I presume.

That aside, I thank senior producer Slamet Sazly Yakub for the opportunity to be on the show - which has featured a string of high ranking officials in the past.

And as I said on the show..it's nothing personal.

HD says: Will see you on Monday Rizal.