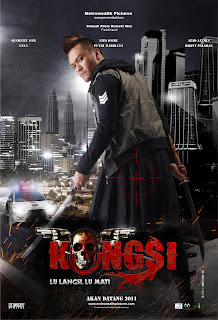 Finally I watched Kongsi and when the show ended, I was all smiles.

You wouldn't get this in your typical Malay movie. Not bad seriously.

Way better than those cheesy toyol movies that are being churned out every year.

Shaheizy Sam played as the leading actor, a Thai named Tumulak. He pulled it off darn bloody well.