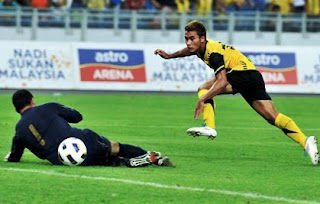 UPDATE (June 25, 11.47am): This comment appeared below my story in Mailsport

"Congratulation MALAYSIA. You are on your way to new heights. However, rather disappointed that the No. 1 & 2 man in FAM does not have the time to watch our players slogging for this win. Supposedly the congratulaory message will be sent out from somewhere overseas.
Anak Perak"

Now for the next hurdle.

Ong Kim Swee was a proud man. The national players deserved a pat on their backs. They fought tooth and nail in that match.

Despite playing with 10-men, Malaysia were clearly the better team of the night. The Lebanese players - despite their flair as seen in Mohamad Haidar - failed when it came to working as a team.

For the record, Malaysia edged Lebanon 2-1 in the Round 2 return leg at the National Stadium in Bukit Jalil. Both teams were tied 0-0 in the earlier leg.

An even bigger stage awaits Kim Swee and Company - the final round before securing a berth to the London Olympics next year.

We shall wait and see.

HD says: It was a good match with an equally good turn out.