Will the Tigers roar? 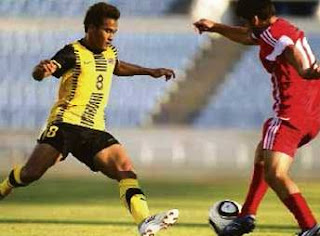 I am part of the Malaysian Spurs emailing group.

There have been a number of threads, from the new kits to the latest signings of the London team.

But one thread caught my eye - Our olympic team

And here are what some of them said:

Leonard Chua Ching Huat
No Malaysian team can beat the one we assembled in 1980! Sorry Shebby... That was the best iconic Malaysian team ever! Till today we talk about Spidey Arumugam, super mokh, chin Aun, santokh, Shukor salleh, Hassan Sani, James Wong, Peter rajah, bakri Ibni like it was yesterday.... We can only wished we will have that kind of calibre ever again... That was truly a 1Malaysia team unlike these days...

Shebby Singh
No apology needed! That was the best ever all time national team!

Syahizan Amir
Well, the new team is quite good too..Nearly won the game in Lubnan..We decided to play defensively in the first half.. Ong Kim Swee did very good lah.. Insyaallah, we can beat them at home.. Especially with strong home support..Come on, lets go support the boys!

It has got even the fanatic EPL fans interested. Here's hoping Malaysia qualify to Round 3 of the Pre-Olympic qualifiers.

Malaysia play Lebanon in the Round 2 return leg at the National Stadium in Bukit Jalil (kick off 8.45pm).