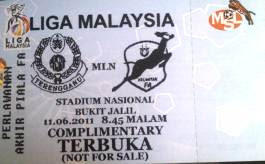 “We are unhappy with the mismanagement in the media area where a lot of non-media people and fans were there.”

Those were the words of Sportswriters Association of Malaysia (SAM) president Ahmad Khawari Isa.

Khawari saw the need to protect his SAM members and thus wrote an official complaint to the FA of Malaysia as the Media box was invaded by fans at the National Stadium in Bukit Jalil during the FA Cup final on Saturday.

Was there an over-print of tickets?