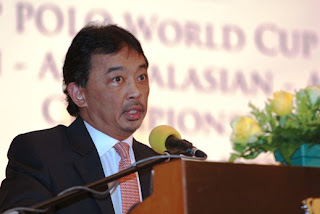 India created history after managing a 12-9 win over arch rivals Pakistan in the Asian-Australasian-African Championships final at the Royal Selangor Polo Club on Saturday.

It was their first win abroad.

However, a finishing sixth in the seven-nation tournament has left the Royal Malaysian Polo Association (RMPA) undecided if they want to bid to host the 2014 FIP Polo World Cup Finals.

“There are several other factors that need to be considered before we decide if want to bid. I have been told that several other countries like India, Pakistan and Canada are also bidding for the 2014 Finals,” said RMPA president Tengku Abdullah Sultan Ahmad Shah (pic).

“We need to raise our polo to a higher level. Some changes are needed to take the game to new heights. It was a good learning experience for the team. They showed tremendous fighting spirit but that alone cannot win matches," added Tengku Abdullah - who is also the Malaysian Hockey Federation president and the FA of Malaysia deputy president.

HD says: Perhaps it's wise not to host the World Cup after all.