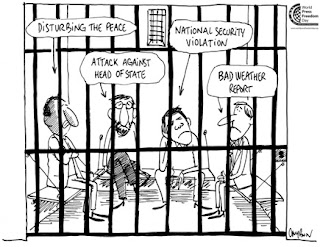 1. In 1991 Raja Ahmad Zainuddin Raja Omar was slapped with a 3 year ban for questioning a referee's credibility.

2. In 2009 Reduan Abdullah was handed a 12 month ban for questioning the fitness levels of players in the M-League and hitting at FA of Malaysia.

3. In 2010, B.Satianathan was given a 6 month suspension for questioning the fixture involving T-Team and Perlis.

4. In 2010, Selangor defender Khairul Annuar Baharom heat-butts Haris Safwan of T-Team and walks away with a 3 game ban.

From the Sidelines today speaks about the predicament faced by five Perak players suspended after supposedly "menyerang" a referee during a game against Sabah in May.

HD says: Justice may be blind, but it can see in the dark.
ban From the Sidelines Raja Ahmad Zainuddin Reduan Abdullah Satianathan