"In the interest of the nation" 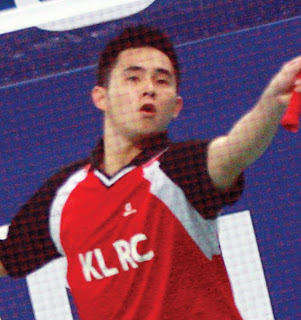 1. The first paragraph of my story lacked the sting compared to my what I had originally written - thanks to I wonder who. Everyone knows Gan Teik Chai (pic) and Tan Bin Shen will not compete in the World Championships.

National independent doubles pair Gan Teik Chai and Tan Bin Shen are unhappy as they have been denied the opportunity to play in the world championships in London despite being the second ranked doubles pair in the country.

2. The BA of Malaysia or any particular individual in its office is not my MENTOR. BAM deputy president Datuk Al Amin Majid has a stake in The Malay Mail but it must be stressed that despite all SMS-es and instigation from various parties, he has NEVER interfered with the editorial content of the paper.

3. Gan Teik Chai-Tan Bin Shen wrote a letter, on their own, to BAM asking for clarification of their status to play in the World Championship on May 12, 2011.

5. On July 27, BAM secretary Ng Chin Chai wrote to the Kedah and Selangor BAs saying:
"As the players are under your State BA, it is up to you to decide whether to call for an inquiry to determine whether the players have committed misconduct and whether to impose disciplinary measures against them."

However, paragraph eight states: "In the event your State BA decide not to inquire into the alleged misconduct by the players and/or not to impose any disciplinary measures against them, BAM will also act magnanimously not to penalise these players…"

This was construed as BAM requesting the state BAs to take action against the players only to soften their stance later.

6. The same letter also saw BAM insisting they had "not discriminated" the duo but had "only acted in the interest of the nation''.

7. Teik Chai and Bin Shen will be in London cheering on the Malaysian players "in the interest of the nation".

8. Note BAM addressed their letters to the players but later insisted they only correspond with the state BAs.

Read more in SS Dhaliwal's How Low Can One Go and BAM Lack B__S.

People should learn how to grow up and deal professionally. They should be quick to admit their flaws, apologise and move on.

HD says: To all those heading to London, all the best, take care and have a safe flight.