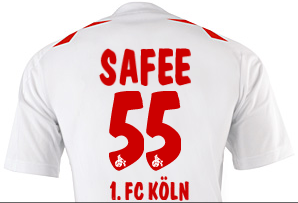 I know this was first reported last week.

But I'm equally amazed with the interest it has created as seen on blogs and forums.

Safee told Astro Arena about the deal last week. Over the weekend, the Pelita Jaya player insisted the deal was still in the early stages and it is private and confidential, as reported in today's Mailsport.

This video shows Safee speaking about the possible German stint while this posting reveals how Safee's jersey would look like (pic).

Meanwhile, KL could be losing more players. The city lads have not received their wages for the past three months as reported by Harian Metro not too long ago.

After the KL-Kelantan friendly match last night, several players revealed they have been approached by Kelantan, Johor FC and Perak and could ply their trade elsewhere next year.

But KL FA are adamant they are not at fault. They are now pinning the blame on current KL mayor Ahmad Fuad Ismail as they only received RM250,000 from KL City Hall this year.

"During Ab Hakim Borhan's time we got a total of RM4.5 million," said an official.

My question - how was the RM4.5 million spent?

HD says: This is what happens when FAs are spoon fed all the time and expect money to fall on their laps.
Germany KL Safee Sali Yong Kuong Yong