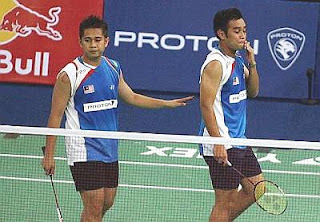 They have resulted in a system which is just dumb-founding if not ridiculous.

Flashback during the KL v Kelantan match at Selayang Stadium last week. Several KL FA officials were lamented they do not get any support from the current KL Mayor Ahmad Fuad Ismail. They used to get RM1 million from Ahmad Fuad's predecessors.

So KLFA has been pampered. They only want handouts. No initiative to run a website, or a blog which is free. No effort. In fact, NST's Devinder Singh has more records on KL for the past two decades than KLFA.

It's no different with the BA of Malaysia (BAM).

Bernama reported Sports Minister Ahmad Shabery Cheek as saying; "...if more decide to follow the footsteps of Zakry and Fairuzizuan... it would be construed that the association was no longer relevant".

Allow players to be independent. They are after all Malaysians.

BAM should concentrate on organising tournaments for all age-groups. Why so much of attention on the elite few? Have training only before a major tournament.

How would my neighbour's son benefit from BAM? I don't know as the masses do not consider BAM as relevant.

At least BAM has been securing good sponsors. At least RM1.6 million from that money will be pumped into development.

HD says: Find your own money la. Government should spend money on better facilities in schools and a reliable transportation system rather than sponsoring officials for overseas trips.