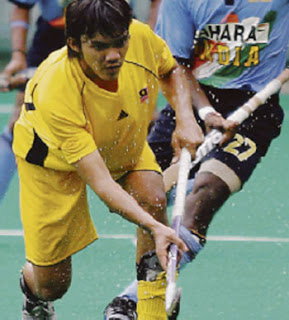 That is what I gathered from the Malaysian Hockey Federation and the National Sports Council regarding the visa woes for Shukri Mutalib and Faisal Saari who are supposed to play in the knockout-stage of the Australian Hockey League.

Both Shukri (pic) and Faisal will return today and join their team mates for the test series against Japan which starts on Sunday.

SS Dhaliwal was the first to highlight the matter as seen here.

The duo were required to apply for a sport visa and not a work permit - as stated in the Australia's Department of Immigration and Citizenship website.

HD says: If only more officials were like NSC hockey liaison officer Nurazlan Shah Adam. He was polite and accommodating - a rare trait among his peers.
Faizal Saari hockey Shukri Mutalib