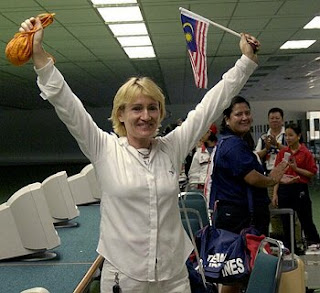 If all nations in world recruit players from other nations to represent them,then it defeats the purpose of sportsmanship and showmanship. Take Singapore as example. I have been to 4 SEA Games, 2 Asian Games, 1 Olympics..when Singapore did well in table tennis using 'China' players, where were the cheering support shown by their fans/citizens? Limited or none! U can spend money, but will it uplift ur citizens taste for glory?

I received that SMS from Lee Hui Seng. And I thank him for sharing it with me.

Apparently the same text was seen on his Facebook wall and it created quite a stir.

However, we also have 'imports' within us - Yuan Yufang and Irina Maharani (pic) to name a few.

For the record, Singapore's defender Daniel Bennett was born in England but lived in Singapore since the age of two. Does that make him more British or Singaporean?

But what say you?