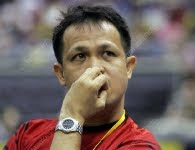 Based on scientific findings by the National Sports Institute (NSI), the BA of Malaysia (BAM) blamed national doubles coach Rexy Mainaky's (pic) training programme for the failure of Koo Kien Keat and Tan Boon Heong at the recently concluded World Championships in London.

This was reported by The Star yesterday.

Today, Rexy took a shot at his critics as he defended the training programme he drew up for the duo.

“I am an Olympic and world champion and I know what is needed by a player. During my time, I used to do skipping and shadow training.

“These traditional methods saw me winning major titles. It all goes back to how much one pushes himself on the court.

Food for thought; What about the players? No fault of theirs?

HD says: Officials only talk, coaches only coach but it is the players who make or break it.