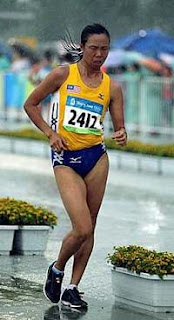 Should national walker Yuan Yufang be allowed to decide on the events she is suppose to participate?

Yufang skipped the recent National Closed Championship to partake in the BHP Orange run instead.

It's obvious the latter event had a better prize money.

"She (Yufang) did not inform me she was pulling out of the event but instead told (walkers) Teoh Boon Lim and B. Thirukumaran that she had heart problems and would not be competing," said an irate Sidamparam, who is also the Federal Territories Amateur Athletics Association (FTAAA) development chairman.