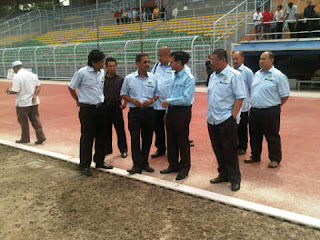 KL FA, through funding from the FT Ministry, settled the overdue wages of KL players as they prepare for the Malaysia Cup which starts early September.

This is a timely Raya gift for the players who have not been paid since mid-May. This was revealed after FT Minister Raja Nong Chik Raja Zainal Abidin visited the Cheras Stadium this morning.

Harian Metro were quick to break the story today.

But the question remains - Why must the government bail out a team every bloody time?

If teams have no means of participating in the M-League, then please withdraw and only compete when you have the resources.

The same money could be better spent properly constructed path-ways or bus stands in the city.

HD says: It's a shame to see people spending like mad only to realise they are cash-strapped at the end of the day.